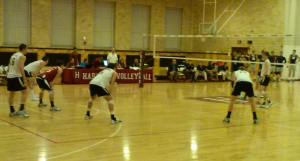 The Harvard Men’s Volleyball team had an incredibly bittersweet ending to their regular season last Friday and Saturday. Form experiencing the thrill of playing their biggest rival to celebrating the amazing legacy of five seniors, the men’s volleyball team took it all in stride with their bro-love showing on and off court.
The first matchup of the weekend was against the men’s volley team’s biggest nemesis, the Penn State Nittany Lions. The crimson had a lot to prove going into this game. The team ad to prepare for the Lion’s revenge attempt after beating them last year in one of the most nail-biting games in the MAC last spring. Upon entering the MAC fourth floor, you could feel the immense amount of adrenaline and excitement from both fans and players. Our men in red stood opposite the schmucks in blue tensed for the biggest game of the season.

The MAC’s bleachers were filled with over 500 fans. The Harvard Dance Team and the Harvard Band also made an appearance to cheer on the Harvard Men’s Volleyball team. There was even a spotting of the illustrious Henry Dunster Moose.
In the first set, Penn State took Harvard down 25-23. Opening the first set with two attack errors by Harvard, Pen state got onto the scoreboard. Over the course of the set, Harvard and Penn State were pretty evenly matched. Penn State almost immediately fired back kills after DJ White ’15 and Caleb Zimmick ’15 scored. Freshman starter Casey White ’17 tied the game up 8-8. Harvard maintained a slight lead of 13-10 after 2 kills from Nick Madden ’14 and a couple of errors from Penn State. Penn State regains the lead and staved Harvard off, winning 25-23.

The second set was just as intense with other freshman starter Nick Bendell ’17, Kyle Rehkemper ’14, Madden ’14, and Zimmick each bringing in multiple kills. Towards the end of the second set, Harvard and Penn State were tied 23-23. The pressure to decisively win this set proved too great when DJ White ’15 committed service and attack errors, giving Penn State the two point necessary for victory.

In order to stay alive, it was imperative for Harvard to win the third set. Heckling from the student section was at its climax as students hurled insults at the Nittany Lions from the rafters. The fans who remained in their eats leaned in clutching their programs as if to capture every minute detail of the game. Every member of the HMV family, players and fans, experienced heartbreak at Penn State’s win 25-22. No one could say that HMV did not give their No. 12 ranked opponent a challenge. Each set was won within a three-point margin. Casey White ’17, Madden ’14, Rehkemper ’14, and Zimmick ’15 all scored kills with assists from Chris Gibbons ’14, Bendell ’17, and DJ White ’15.

Despite losing to Penn State in three incredibly close sets, the spirit of the Crimson was not crushed. After the obligatory show of sportsmanship, Crimson fans swarmed the court for autographs and pictures with the men’s volleyball team. The Department of Athletics provided each fan with a glossy team photograph that was waiting for the scrawls of the home team. Local high school girls got slightly mob-like as they encircled Madden for an opportunity to pose with his biceps. Even though the Nittany Lions won, few people in the MAC paid them fanfare; everyone was concerned with congratulating our favorite hitters and blockers.
With a renewed sprit, the Harvard Men’s volleyball team was set to face off against Saint Francis, who also hail from Pennsylvania, on Saturday afternoon. This game was the Crimson’s final regular season game.

The men’s volleyball team came back with a vengeance to make up for their loss during the previous day’s game. The Crimson beat Saint Francis 3-1. Harvard easily won the first two sets 25-19 and 16-25, respectively. During the third set, Saint Francis made a come back and reminded the crimson of their presence. Scoring 25-18. Harvard clearly did not take that message kindly and sent Saint Francis packing 25-16. DJ White ’15 lead the Crimson in most number of kills, clocking in at 15. Nick Madden came in second, contributing 13.

The win against Saint Francis was an excellent gift to the five seniors who were recognized before the first serve. The Harvard Men’s Volleyball Team is sadly saying goodbye to Nick Madden, Chris Gibbons, Kyle Rehkemper, Michael Owen, and Will Chambers.

After an amazing 9-3 EIVA conference record, The Harvard Men’s volleyball team is gering up for play-off games against NJIT and Rutgers-Neward on April 11th and 12th.
Hopefully the seniors and HMV’s rising talent will make a huge sweep in the post-season matchups.

Shaquilla Harrigan ’16 (sharrigan01@college) congratulates all the HMV seniors on their accomplisments!