Strong and together, a city that never faltered. 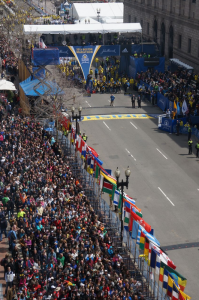 A year ago from Tuesday, on Marathon Monday — a day more important to Bostonians than can be explained in words — two brothers, Dzhokhar and Tamerlan Tsarnaev, allegedly tried and succeeded to a degree in degrading the special day. Using bombs placed near the finish line of the Boston Marathon, the brothers killed three people, Krystle Campbell, Martin Richard, and Lingzi Lu, as well as injuring many others. The tragedy sent the city of Boston and its surrounding areas into turmoil. Harvard students and affiliates running in and attending the Marathon were frantically called, emailed, and texted in an effort to assure some sort of words of safety.

As someone born and raised in southern Massachusetts, the city of Boston and the state as a whole means something special to me. It is my home, my capital, my hangout spot. But I am not a Bostonian, nor would I ever pretend to be. So my words on the Marathon and my passion for the city should be viewed in this context; that is, I love this city and living in Cambridge has only made me love it more, yet I could never understand what the native people of the city went through during the Marathon last year.

The terror of having two American, Massachusetts-raised men actively choose to create such harm and horror on such a sacred day for Boston is beyond words. But this has been addressed enough.
Instead, as a sports writer, I look at the day through a sports perspective.

The Boston Marathon is one of, if not the most, notable marathons in the country. The act of running a marathon itself is one of the most incredible achievements of man. Running 26.2 miles consecutively is remarkable, not to mention some of the amazing times that these athletes finish in.

The rebound from bombings was reminiscent of these athletic achievements. The city grouped together, arm in arm, faced the terrorism that surrounded them, and prevailed in showing that undying love for the city and each other would prevail. People will for years remember moments like the beautiful vigils that were held at the finish line or the singing of the National Anthem at a Boston Bruins game days after the event.

I grew up in a sports family. Everyone seems to be an athlete or a coach, and the atmosphere related to that transformed my family into a team. We focused family reunions around sporting events. We played pickup games of basketball and football in the yards of each other’s houses. In a similar way, Boston is like a really intense sports family. The Red Sox, Bruins, and Celtics are a religion. The Marathon is a sacred ritual where the entire city takes the day off to celebrate.

So when two people had the audacity to try ruining this day, the city reacted like a sports family would. They stood strong. They sang. They cried over the terrible tragedy, but most importantly, they rose stronger than ever before.

The city was not broken and even less so broken, thanks to the mentality of the Boston citizens. Everyone was ready to act, to serve, to love.

Now, we are days away from the 2014 Boston Marathon, which will without a doubt be the biggest and loudest of them all. Runners will group together and perseverance will reign supreme. The crowd at this year’s Marathon is expected to be even more packed than ever before. The cheers as people cross the finish line will probably echo louder than they have in the past. Boston Strong was and still is the motto of the city, the event, and the general aura of this beautiful city.

The tragedy on April 15, 2013 was as sad as the city had seen in years. An attack on an innocent people can never be forgotten, nor should it ever be. But on April 21, 2014, the city will regroup, remember, and, most importantly, run. We are a group of people that did not run from the pain. Rather, we ran together. Images of first responders running to the scene were a poignant scene painted in the memories of all people. And this year, hopefully, the image of the hundreds of runners will return as the true image of the day. The recognition of human will and the limits that are transcended by running a marathon will once again shine bright. Boston will continue to be strong, the marathon will return stronger, and the people of the city will be seen once again as the strongest family of it all.