A Conversation with Ang Lee and James Schamus. 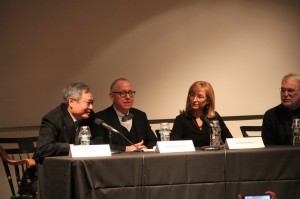 On Friday, October 25th, The Fairbank Center for Chinese Studies in collaboration with the CCK Foundation Inter-University Center for Sinology, Harvard Film Archive, Department of East Asian Languages and Cultures, Harvard University, and Taipei Economic and Cultural Office invited Ang Lee and James Schamus to a symposium at the Sackler Museum focused on Lee’s numerous cinematic works ranging from his first renowned success with Pushing Hands (1992) to his latest blockbuster hit, The Life of Pi (2012). 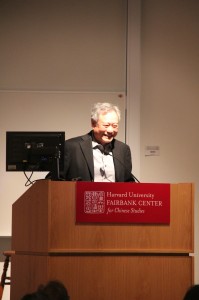 He was born in Taiwan in 1954, studied theatre direction at the University of Illinois at Urbana-Champaign, and has an MFA from New York University. His films have touched upon diverse topics and themes, ranging from an Eastern focus on Confucian families adjusting to the modern world with his “Father Knows Best” trilogy (1992-1994) to a Western focus on the American Civil War with Ride with the Devil (1999). Along the way, he revolutionized the wuxia genre with his film Crouching Tiger, Hidden Dragon (2000), which later went on to becoming the highest grossing foreign-language film in America, brought Jane Austin’s beloved novel Sense and Sensibility to life on the big screen in 1995, and detailed an incredible forbidden love story between two cowboys in Brokeback Mountain (2005).

But how is Lee able to so aptly portray the concepts of tradition versus modernity, and Eastern versus Western so beautifully on the screen? How is he able to capture the complexities of human emotions and gain such insight into the human heart? How is he able to transcend cultural and geographical barriers with his films?

Those were the questions that an auditorium packed full with students, fans, faculty, and locals were waiting to ask and find out the answers to.

The symposium started out with scholarly reflections on Lee’s work. A panel of four professors from various universities each presented their favorite movie and their analysis of Lee’s motives and motivations.

Christine Kein from Boston College opened the discussion with “The Diasporic Dimension of Ang Lee’s Cinema.” Kein focused on Lee’s film Crouching Tiger, Hidden Dragon as a landmark film that made the transition from art houses to cinemas and really shed light on how films can be global — not only in terms of the viewer base, but also in financing and production. “This is the work of a diasporic community,” she claimed. “Ang Lee belongs to the Chinese Diaspora.” A diaspora is a scattered population who share a common origin, and the term has been commonly used to describe historical mass dispersions of certain populations. According to Kein, there is a triangular network of relationships that comes with belonging to a diaspora. First is a strong desire to return to the lost homeland. “Collected memory fuels a desire to return,” she said. She believed that Lee’s perceptions of China came from his parents’ stories of the old China from the past, of a dream China. And she believed that it is through this movie that Lee achieved his symbolic act of return to a Chinese homeland. Secondly, those belonging to a diasporic community tend to form strong bridges to other members of the group. Kein felt that it was through tapping into the talents of this diasporic group that Lee was able to showcase such distinctive styles in this film. Lastly, members of a diasporic community only partially embrace the new culture that they find themselves immerse within. Though many have referred to this as ‘not fitting in,’ Kein herself believes that this was something that really enhanced Lee’s films. She called Crouching Tiger, Hidden Dragon a truly integrated martial arts film, with fight scenes that developed the characters psychologically instead of just being there for the sake of being there — as is common in previous wuxia films. Through the film, we came to understand the tension between duty and freedom, as well as the conflict between loyalty to self and loyalty to others.

Jerome Silbergeld from Princeton University discussed “Ang Lee’s America,” in which he focused on Lee’s films The Ice Storm (1997), Ride with the Devil (1999), and Brokeback Mountain (2005). Silbergeld remarked on Lee’s technique of contrasting the grim dull colors of the town in Brokeback Mountain with all of its societal rules and customs with the brightly colored wild, which represented freedom. He went on to connect this to Ride with the Devil, in which Lee moved the film from light to dark to light, from peace to war to peace, and from naive hope to tragedy to more naive hope. Through that movie, Silbergeld believed that Lee demonstrated that geography is fate, but yet we can rise beyond that fate to make our own choices. Lee’s great achievement was showing the deeply held visions of truth on both sides in the movie. Impressed with portrayals of America in Lee’s movies, Silbergeld asked, “How does a foreigner understand us better than ourselves?”
Chien-hsin Tsai from the University of Texas at Austin shifted the focus from America to Taiwan and spotlighted the constant theme of food throughout many of Lee’s movies. “Food is both a staple and the stapler,” he said. He referred to the movie Eat Drink Man Woman (1994) in which the father was a top chef who loses his ability to taste. Tsai believed that for the father, losing the ability to taste was equivalent to losing a big part of his life. “For him, homecoming is no longer possible,” he concluded, which seemed to reference Kein’s earlier discussion on the desire to return to one’s homeland. In 1949, Taiwan saw a large wave of Chinese immigration with roughly two million refugees, many of whom were from the Nationalist government, the military, and the business community. This move wasn’t easy, and building up a new life in a new place comes with its share of difficulties. Tsai believes that in many ways, Taiwanese people learned the think and act outside of the box — a skill which he feels contributed greatly to Lee’s films.

Eugene Wang from Harvard University ended the panel discussions with “What is the Caution in Lust, Caution?” It was a lighthearted and funny discussion on Lee’s casting choices for the film, as well as the techniques that he used as a director. As he was unable to ask Lee about his directing techniques before preparing the presentation, Wang focused on the techniques of Lee’s mentor, Lenore DeKoven, who he believed influenced Lee’s directing style greatly. DeKoven had once revealed that in directing, less is more. She advocated giving actors minimum cues and letting them play out their own stories. In this way, the end product was something greater and better than what anyone could have expected.

The symposium ended with a conversation between Lee, Schamus, and Eileen Chow, a professor from Duke University.

How does he decide what movies to make? All of his movies start out with a feeling inside of him. “I feel a compelling need to deal with those feelings,” Lee said. And the process of dealing with those feelings brings to fruition a beautiful film. As a result, it is perhaps not difficult to see how Lee has been able to capture the complexities of human emotions so well. A movie that starts out with a feeling, an emotion, or a desire that is dying to escape from within will be more likely to grow and develop into a compelling, sorrowful, and touching story.

In a sense, movies have become a medium through which Lee has gained a sense of identity. Lee revealed that he had trouble finding a place where he belonged. In the States, he was a foreigner from Taiwan, and back in Taiwan, he became a foreigner from America. But it is through movies that he has truly found a place for himself. And this constant movement from place to place has greatly influenced his films. “That’s who I am. I want to be accepted. Only through movies, I am,” he revealed. “That’s why I don’t want to make the same movie [in reference to sequels]. I want to keep moving. I don’t want to stay there.”

For Lee, a film is not complete until the audience has seen it. He enjoys watching their reaction to the characters on the screen. And it’s an integral part of the process from that very first feeling, to the script, to the production, and to the final film.

“I just feel very fortunate that I get to make these movies.” He revealed. “It’s not a job. I like what I do.”