An interview with violist Anna Sato.

Anna Sato is a sophomore in Quincy House, planning on concentrating in Statistics. Hailing from Stony Brook, New York, Anna has been involved in several music organizations since freshman year, including the Harvard-Radcliffe Orchestra and the selective Brattle Street Chamber Players. 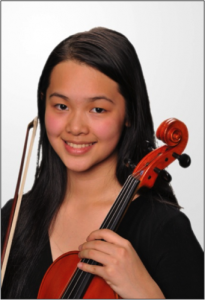 Indy: When did you first start playing music?
AS: I started to play the piano when I was 4, the violin at 6, and the viola when I was 12. Over the years, I eventually dropped the violin and focused on playing the piano and viola throughout high school. These days, I primarily play the viola. It’s funny because no one else in my family is musical. My dad was very encouraging of the arts when I was a young age so I started music (along with ballet).

Indy: Can you give us a summary of your music experience at Harvard thus far?

AS: When I was a freshman, I was involved in the River Charles Ensemble, the Brattle Street Chamber Players, and the Harvard-Radcliffe Orchestra (HRO). I also took Chamber Music 187, a “course” which allowed me to get credit for forming small ensembles with other students. As of now, I am primarily engaged in HRO and Brattle. Since last year, I have been the Director of Sales for HRO, selling tickets and merchandise such as CDs, sweatshirts, stickers, and shot glasses.

Indy: Has your perspective on music changed from high school to college? Did your success in high school affect it in any way?
AS: When I was in high school, I qualified for All-State, All-Eastern, All-National and also the Juilliard Pre-College Division. I tried extremely hard to be the “best.” The competitive edge in me was a certain drive throughout my musical career. Don’t get me wrong. I loved playing music, but there was more stress and pressure involved. But now that I’m in college, I see music as more of an extracurricular rather than anything else. It’s much more fun and not very stressful. The seating in HRO is rotational (minus the principal spots) and there is only one audition (to get into the orchestra, not for the seats).

Indy: Best experience?
AS: Something that is different from high school is that there are a lot of social gatherings in college, such as parties. You get to know people beyond the surface level. You don’t get to really know people personally during sectionals or rehearsals because the focus is all on music. Something that is often memorable is the HRO retreat (which I just got back from this weekend at Greenwood). You’re with the same group of people for the weekend, including the conductor. You rehearse a lot, but there’s also lots of time to get to know people. It’s a yearly tradition at retreat to sit in a circle on the first night and introduce yourselves; and if someone in the circle has a story about you, then they tell it – be it an embarrassing story at a party or even just an interesting fact.

Indy: Worst experience?
AS: I fractured my right elbow while skating with friends in New York over winter break. I was out for two to three months. I did a little bit of playing but still had to miss a concert. It was just frustrating sitting idly by while everyone was playing.

Indy: If you were a musical instrument, what would you be? Why?
AS: Definitely a viola. I am what I play. I don’t think I’m relatable to a violin because I’m not incredibly hyper or high-pitched. A bass is just too big. Viola describes my personality well – calm, mellow and zen. It’s a good compromise between two opposite extremes.

Indy: How often and for how long do you practice in a week?

AS: In high school, I practiced two to three hours every day. These days (laughs)…I just practice to the point that I can keep up with the rest of the group.

Indy: How hard is it to balance schoolwork and music activities at Harvard?
AS: It’s like balancing any other extracurricular activity with academics. I started with four music organizations in the fall of my freshman year. I eventually dropped a few to join other extracurricular organizations such as the Harvard Financial Analysts Club. I do music because I like music. When there are too many rehearsals and commitments, music becomes a burden, so I try to use that as the standard.

Indy: Do you have any tips for freshmen interested in joining musical groups?

AS: Do as much as you can while still enjoying it. When you reach the point when you feel that you don’t want to be at rehearsal anymore, you should drop it, because you’re forgetting why you love music in the first place. Also, if you want to maintain your musical talent, you need to practice. Unlike in high school, there are no private lessons or monthly auditions, so the pressure to practice is actually very low here. Self-motivation is absolutely necessary.

Indy: Do you see yourself playing music in ten years?
AS: I think so, although probably not as much as now. Hopefully, wherever I will be, I can still get some musicians together and play chamber music for fun. It’s really a good way to relax and get your mind off the stress of daily life. Otherwise, I might teach kids on the side as a way to stay involved in the music world. At minimum, I hope to take my viola or sit at my piano now and then to just play by myself.

Eldo Kim ’16 (eldokim@college) doesn’t understand why the triangle is considered an instrument.