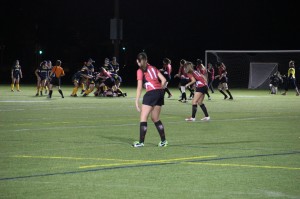 Upbeat girl-power anthems sounded in the background as the Harvard Women’s Rugby Team took to their AstroTurf-stage Tuesday night. The team made history as the first Division 1 NCAA women’s rugby team. Not only is the women’s rugby team the 42nd varsity sport at Harvard, but also it is Harvard’s newest sport in 20 years.

The women’s rugby team played the Quinnipiac University Bobcats in a tough game. Despite amazing tries scored by Xanni Brown ’14 — who is, completely coincidentally, a beloved staff writer for the Harvard Independent — and Aniebiet Abasi ‘15, the women’s rugby team fell to Quinnipiac 39-10.
While the Harvard Women’s Rugby team had difficulty receiving possession of the ball after performing a lineout, standouts Cayla Calderwell ‘14 and Helen Clark ‘15 did an excellent job on defense. Both women were also instrumental in holding the scrum strong.

Even though the Harvard Women’s Rugby team lost their first game of the season, fans rooted enthusiastically for the team until the last few minutes of the game and into the team’s triumphant victory lap around the field. Beyond the scoreboard of this game, members of the Harvard Women’s Rugby team own a victory in Harvard Athletics. The traditions of hard work, dedication, and a love of rugby carried the small club team that was started in 1982 into varsity territory.
Tim Wheaton, associate director of Harvard Athletics, was among the fans cheering the team on during their inaugural game. “There is only one first, and it is great to be at the first Harvard Women’s Rugby game,” stated Wheaton, who went on to say that it is “fantastic” to see the hard work of students and Harvard administrators culminate in the creation of the Varsity women’s rugby game. He is proud to provide support and see the growth of the team.

As the Harvard Women’s Rugby team made its transition from a club team to a Division 1 varsity squad, captains Brandy Machado ’14, Ali Haber ‘14 and Xanni Brown ‘14 were highly instrumental in seeing the team transition. Machado said, “The biggest difference between club and varsity playing is that intensity must be up.” She also joked that the biggest perks are the “swag—all the new warm-ups and jerseys—and the laundry loop. Last year, I had to wear a jersey that had a huge rip up the side.”

Machado said, “As captain, I have to remain level headed and set the tone.” On working with the new coaching staff, Machado explained she’s happy with how “they aren’t disconnected from the team. We’re all on the same page. There were weekly phone calls, so were ready to go the second we were all back on campus.”

Haber said one of her favorite parts of the transition was “the support of Harvard believing in us and our ability to represent Harvard.” She also explained that going varsity has “challenged the team’s fitness in a really good way. There has been a strong physical and mental focus.”

Head coach Sue Parker, former head coach of the Navy Women’s Rugby Team and chair of the USA Rugby Women’s Collegiate Strategic Committee, comes to Harvard with a wealth of knowledge and experience. On working with her new team, she explained, “I knew that coming in, it [the Harvard Women’s Rugby Team] would be a unique, committed group. The entire staff is pleased with their effort and improvement.”

Coming to a team that has been established since 1982, Coach Parker appreciates the traditions that she inherited and hopes to build new ones into the program: “The best traditions have been carried over from the club team. They’ve been in existence for thirty years. There is a rich tradition of camaraderie.” Some of the women’s rugby traditions include a post-game song and a group effort to clean the field. Other traditions are “top secret.”

Captain Ali Haber hopes to leave behind a tradition of teamwork. “I want the team to make a family that is a super open place, even to players who have no prior experience.”

By the Yale game on Saturday, September 21st, Coach Parker hopes to work with the women to continue improving on scrums and consistent possession. She wants her team to play “open…play a wide open and dynamic game plan that suits our athleticism.” Haber goes on to say that when she looks ahead to the Yale game, the first word that comes to mind is “Winning,” Haber says, “We can beat Yale. We can play our game, and play right.”

Hopefully Haber’s words will speak true when the Harvard Women’s Rugby team confronts its toughest opponents, Princeton and Brown, later in the season.