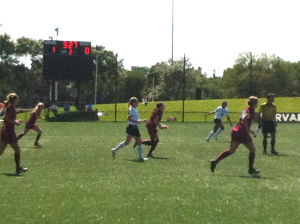 Donning my favorite crimson Harvard T-Shirt, I went to my first-ever collegiate varsity athletic game: women’s soccer featuring our Harvard Crimson vs. Long Island University Brooklyn Blackbirds. This leads me to my first question: How does Long Island University have a location in Brooklyn? Unless my geography teacher lied to me, those are two different parts of the state.

Not knowing what to expect, I left early for the game, but in the true spirit of being a freshman, I managed to arrive to the game a bit late, having gotten severely lost on my journey to the Soldiers Field Soccer Stadium.

The atmosphere of the game was not at all what I expected. A large portion of the audience was made up of families with babies and small children and athletes spending their leisure time away from training rooting for their friends. The other, much smaller portion, was, well, me, myself, and I.
There was a nice crispness to the air and the sun beat down in a way that was strangely reminiscent of my life back home in Florida. It was the kind of weather that demanded rolled up sleeves (we South Floridians don’t do tan lines) and promised gorgeous conditions for a soccer match. Excitement was in the air. The weather and emotion from the babies in the crowd added a real sports atmosphere. Or at least something like it.

The Crimson boasted an impressive presence on the field. The eleven women on the field acted as a collective unit, exhibiting adroit ball movement. As soon as I sat down, junior defender Marie Margolius from the Crimson headed the ball as it came down from no less than thirty feet in the air, exciting the crowd. Cheers from the few Harvard faithful energized the night, as the game looked early to be of a Crimson hue. LIU seemed to flounder with a weak defensive line that allowed Harvard freshman forward, Margaret “Midge” Purce, to score in the first half — the only goal scored in the game. The second half of the game proved to be equally matched, with each team unsuccessful despite a few scoring attempts.

Freshman defender Bailey Gary of the Crimson kicked the ball over the high fence and out of bounds, sending a referee scurrying to recover it. I’m not sure if she knew this, but the ball is typically supposed to go into the net, not over it. Perhaps her kicking skills are more in line for rugby or football. It was impressive nonetheless.

With about fourteen minutes left in the game, Marie Margolius drove a shot, but the ball was blocked by LIU Brooklyn goalkeeper Jessica Sexton, dampening Crimson efforts to increase their lead on LIU.

As the game wound down, each team pushed themselves even harder. Plays and passes rapidly increased in tempo, ultimately culminating in a dramatic injury on the LIU team, stopping the game for several minutes before the injured player was able to stand up and walk off the field with the echoes of applause following her, allowing play to resume, albeit with much less spirit than was previously exhibited. The game looked to be a lost cause of LIU, and the injury only added to the devastation of defeat.

The Harvard Crimson ended the game gracefully, holding off offensive plays for the final few minutes of the game until the clock ran out. The 1-0 victory secured the team’s first win of the season, and improved their record to 1-3-1. If one pictured a typical soccer game, one would indeed be picturing this Friday game: one goal, lots of stoppage, and an injury. As far as stereotypes go, the woman’s soccer team seemed to be aiming for the ultimate cliché.

Yet, despite the hackneyed appearance of the contest, the Crimson ladies represented their school proudly. The excellent performances of freshman players Durack and Purce — who lead the team with 21 shots coming into the game — shows that the Crimson’s addition of nine new players to the women’s soccer roster this year promises a solid season, especially once the Ivy League schedule starts on September 27th against Penn.

It is the my hope that Harvard students will turn out in greater numbers to support the Crimson at the next women’s varsity home game on Saturday, September 20th, at 7:00 at Soldiers Field against University of Rhode Island. Maybe with a few more riled-up college students, the only babies at the game will be the ones wearing away uniforms.

Dominique Luongo ’17 (dominiqueluongo@college) had hoped for more cheers and fewer diapers at the game.