A serious revelation on student leadership on campus. 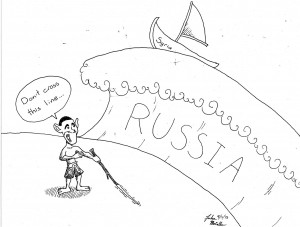 When I’m not writing groundbreaking op-eds for the Independent, I’m performing and choreographing for two on-campus dance companies. When I’m not doing that, I’m running their publicity, and have been a publicity officer for two years. And after two years of waking up thirty grumpy people at 6:45 a.m. over the course of two weeks so that we can fight other organizations over who gets to hang their piece of paper in a better place than the other pieces of paper, you’d think I’d know what I was doing as far as leadership goes.

I thought it a bit unnecessary, then, to find myself in the OSL’s annual leadership workshops covering for my co-directors (unfortunately, I’m not smart enough to say no to things, which bodes well for my military career). Is it condescending to make long-time student leaders sit through nearly identical lectures every fall, often at least a semester after they took office? Is it ineffective to structure the workshops so that a senior about to leave office can knock out the student group’s registration requirements in three hours? Should they have served better snacks? Yes, yes, yes. Should the OSL quit while they’re ahead before they have a mutiny on their hands? Nah. Surprisingly, I actually learned something.

As experienced leaders of student groups, we know the rules of postering. We know how to manage our group’s bank account. We know how to plan events and generate enthusiasm. (Here’s an idea — why not have these information sessions in the spring, when new officers take on new positions and could actually use some practical advice? Egad!) After a while participating in extracurriculars, this practical side had started to feel like the be-all and end-all of student leadership. Once I took on more activities and when academic obligations piled up, my titles started to feel like just a list of tasks rather than a real position. I do this, I do that, I get introduced to newcomers, I get a thank-you. I’m the same as anyone else in the room except I do a little bit of extra busy-work on the side.
That’s not really true, though.

Maybe this was especially potent because I’m coming into my fourth year at Harvard and feeling my seniority, but the workshops I attended brought out the responsibility — and, more importantly, the opportunity — to use our authority to build better communities. It’s not like anyone is going to take me that seriously, but I’m still someone that underclassmen, at least, look to as they feel out the tone of the dance companies and figure out how we interact with each other. That’s true whether I deserve it or not and whether I am conscious of it or not.

The whole sentiment sounds cheesy as hell on the first pass, I know, but it really is the state of things here. We learn about these organizations from those who are juniors and seniors while we are freshmen. I already advocate for a certain vision of what I want my dance companies to be like: I want them to be inclusive, fun social groups that support creativity and feel like a good place to come home to. I didn’t get that on my own — I inherited it. At the workshops we heard a lot about the longevity of our groups, and at first I wondered why anyone cared about how long these organizations last. It’s partly so that the founders and leaders can extend their ego trips as long as possible, sure, but it’s also just good stewardship to leave things as prosperous as we found them so that new classes can benefit from a group the way that we did. It’s a place to do what we like and be liked while we do it. That’s the point.

The OSL made a clever move by throwing some leadership morality into the mix of organizational tips. I don’t think many of us really identify with our class years, and the collective student body is far too nebulous to identify with. Some of us feel very connected to our houses, but most of us, I think, feel most a part of a specific group on campus. The fact is that student leaders are an underutilized starting point in initiating the cultural shifts that Harvard desperately needs. Also, student leaders, including myself, need to be much more aware of the effect that we have on our small-scale communities, which expand and affect our community as a whole.

I really loved one part of the Student Leadership Essentials workshop in particular: a good stretch of time was devoted to talking about how to keep these communities safe, physically and emotionally, and how to responsibly intervene if there’s a real problem. Everyone at this school knows that suffocating feeling of having everything to do, no time to do it, and no one to confide in. We could change that. The mental health conversations we had last year largely surrounded student suicides. We could change that. You do know that feeling like a valued member of an extracurricular community could be life saving, right? I don’t mean that in the cutesy way — I mean it literally. We don’t need to make our student leaders responsible for the health of their groups, but we could easily make the groups collectively aware of the health of their own members.

This doesn’t have to be rocket science. It’s not hard to become less of an inadvertent asshole. Group leaders could make PGPs a standard part of group introductions. We could better monitor the way we implicitly use sexism. We could ask if someone’s okay when they walk into a meeting looking like they got hit by a mental 18-wheeler. This is simple stuff, and a cohesive effort on the part of 100 group leaders could substantively change the Harvard undergrad culture. So here’s a shout-out to everyone who has a title, whether you’re Executive-in-Chief or Secretary of Toilet Paper Services. By virtue of that title, people are watching, and even if their attention spans are only six months long, you have a great opportunity to make your group a better place to be. Take it. Here’s looking at you.

Lauren Covalucci ’14 (covalucci@college) is an always-available pillar of support for her grateful editor.