Making the case for your beloved dance form. 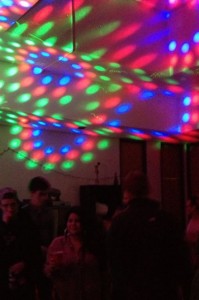 It was in the damp, dark recesses of a Quincy suite that I was truly initiated to the US of A. Strobes flared, beats blared and hips swayed: to music — and to second person pelvic thrusts. Grinding, I was told, represented a fleeting cultural phenomenon of young America. For me, however, it has come to represent a material art form encapsulating the quintessence of the American spirit.
Coming from a place as culturally straitjacketed as India, accepting the ‘dance form’ with all its subtle logistics was as much counterintuitive as it was antithetical to the belief systems I grew up internalizing. Dance in India was an affirmation of the universally accepted assumption that we lived in a sedately demure society — an extension of the still larger assumption that ‘sex’ or indeed intimacy of any form became unbearably unhealthy when it transgressed the bedroom confines. Dance forms had, to them, a molded reserve: the women are expected to be grace incarnate and the men, Hercules represent. Tunes follow by-the-book conventions, as do specific steps. Truly every aspect has a purpose and a function: anything overshooting these bounds is ever so expeditiously excised.

Grinding directly challenges and seeks, unabashedly, to reverse these notions. It strives to manifest a form of sacred intimacy out on the dance floor and on the street — in what is (arguably) a largely non-sexual context. The extended process of manifestation in a way that obliterates any space for inhibition forms the very reason why I consider it an edifice of art in first place. ‘Grinding’ projects the freewheeling, boisterous character that America possesses. It is, no doubt, the victory of effervescence over stasis, candidness over veils and expression over complacency — overarching qualities that have, for long, been the differentials of America in the world calculus. Grinding is — quite possibly —the first dance form that extracted from the national character these gems and applied them to a fairly healthy form of artistic interaction that could most directly involve two absolute strangers.

My support for grinding extends for reasons far beyond those too. In terms of its concept and mechanism, it appeals ever so gregariously to the entrenched feminist in me. It forms one of the few dance forms where females can claim to be ‘on top’; frozen moments in time when men are essentially reduced to passive participants. Few people will contest the contention that ‘grinding’ forms one of those rare structured activities where the beauty and aesthetics of the activity itself are determined by movements of the female. This stands starkly contrasted against more exalted forms like salsa or ballroom, where the patriarchy power syndrome once again comes into play — feminine presence serves largely to glamourize and supplement what are, in essence, carefully structured rigmaroles of masculine acrobatics. In fact, such is the vitality of the female role in grinding, that even if masculine shadow were to be eliminated, it could still pass muster as a stand alone act — precisely the reason those delectable ‘twerks’ have become a ubiquitous sensation in America and beyond. (Fun fact: ‘Twerk’ was one of the few words that the Oxford dictionary decided to recognize in its online version on August 27, 2013.)

It is fairly easy to recognize where much of the highbrow disavowal of the dance form might spring form. Grinding is said to have originated in the Caribbean islands and its popularity in mainland United States first took off as a viral phenomenon amongst a small section of the Black population. The dance does not conform to Caucasian, elitist conventions of propriety and sobriety; it refuses to buy into the mold of an intrinsically ‘cultured’ American. Yeats probably encapsulated this white attitude best when he wrote: “How but in custom and in ceremony?are innocence and beauty born?”

In fact, dismissal of the dance by mainstream America could be compared to the widespread rejection of Rachel Jeantel’s testimony in the Zimmerman case by the same sample population. Her credibility was not only discounted but also intensely critiqued for the lack of ‘culture’ in the way she spoke, dressed and even wore her hair. Much of the spasms of frenetic headshakes at the mentioning of the word itself, thus have a lot more to do with sub-surface cultural friction, than actual opposition to the dance form in itself. This makes it all the more culturally imperative for us to embrace this dance form as a people and as a society.

For all the responses it evokes or all the frowns it provokes, grinding — I am convinced — is a sublime art form that neither assumes nor requires. And you know it is not entirely wrong when coming from a purebred Indian traditionalist. It is the optimal celebration of all that we value in our culture and calls for no less patronage than the Constitution and Big Macs do.

Aditya Agrawal ’17 (adityaagrawal@college.harvard.edu) wishes he could finish the Big Mac in one go and write a delicious sonnet about it.