Examining the Coop’s quasi-monopoly on the textbook industry. 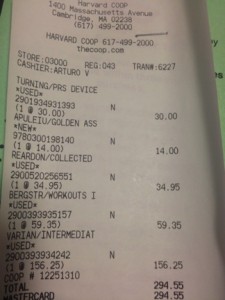 While the past two decades have seen an admirable increase in the accessibility of college, particularly to low and middle income families, one area of financial concern still remains: textbook prices have soared to the extent that many students simply cannot afford them and are looking for alternatives such as online rentals, book exchanges, and even illegal downloads.

Returning from the Coop this fall, I stopped to look at my receipt that covered the majority of the books I needed for the semester. It read a staggering $294.55 and does not begin to include a handful of coursepacks and additional texts ordered via Amazon. The total expenses came out to approximately $400. What’s worse, my peers and I stared at our respective bills with an apathetic indifference, almost grateful that the damage wasn’t worse.

An initial price shock after our first trips to the Coop is only natural. Many students at Harvard, particularly those from public schools, are buying books for the first time. Novels purchased at bookstores typically run from $10-$30, a far cry from the close to $200 required to purchase the sixth edition of Professor N. Gregory Mankiw’s “Principles of Economics” textbooks. So what drives the price of a textbook?

According to The National Association of College Stores, “roughly 33 cents of every textbook dollar goes to production cost and another 11.8 cents of every dollar going to author royalties.” Already, these costs account for nearly half the book’s total cost. The second issue, not with the cost of the books themselves, arises when professors require books that have equally viable, cheaper alternatives or books that are hardly used in class. As it stands, professors and lecturers have no incentive to keep class related costs at a minimum — they pay nothing out of pocket. Perhaps this view is cynical, but it does offer insight into the reasoning behind “requiring” hundreds of dollars worth of textbooks only to use them a handful of times.

Students lament the lack of viable alternatives on campus, as Coop rentals, which are generally half the price of the new book, still remain out of reach for many students. Thus, many turn to other online vendors such as Chegg, which acts as a wholesale book renter, and Amazon. Sharing his thoughts on the dilemma students face, Brendan Newman ’16 of Mather says, “the prices listed at the Coop are just outrageous. I usually find the books I need on Amazon, but there is a waiting period that comes with the delivery. For a week or two, then, I’m scrambling a bit.” While some professors have taken steps to make course materials, specifically textbooks, more widely available by uploading documents online, many students still pine for a hard copy. Bryan Moore ’16, also of Mather, notes that, “in some ways, I do appreciate professors uploading books and coursepacks online, but I still prefer having a hard copy that I can mark up. Working in front of a computer for hours on end hurts my eyes as well.”

While textbook prices are likely to remain high for the coming years, progress is being made in the space of E-books and E-readers to make online reading a more affordable, user-friendly experience.

Manik Bhatia ’16 (mbhatia@college) resents the Coop for cramping his style.