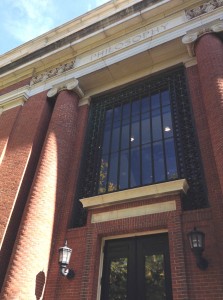 I’m sitting at a massive wooden table, which is still glossy despite many spilled cups of coffee and generations’ worth of note taking. I’ve managed to maneuver my clunky chair into a relatively comfortable position, but my left foot still wants to fall asleep. The windows to my back are open to the sun, and the window to my right faces a tree that most likely feels ill-used as the subject of countless explanatory examples (philosophers love their trees). If we’re lucky, there are construction workers deafeningly attacking a nearby building. The Memorial Church bells start sounding out the hour, but half of the class is held to the table — as we always are — by the inertia of an unfinished thought, so we stay sitting and tie up the loose ends of the conversation — as we always try to do. Maybe, though, this is all just an extremely vivid dream; or maybe I am being deceived by an evil demon and can’t trust my faculties….

Or not. Welcome to Emerson 310. If you find yourself here, you’re either lost or in a philosophy seminar (NB, logicians: I’m using the inclusive ‘or’).
If the aphorism about moons and moccasins is true, I should know the room well. I’ve sat in Emerson 310 for what feels like two dozen moons, starting my sophomore year, when I began taking more serious philosophy classes. At the least, I would be there an hour a week in section; at the most, I would go there for three separate classes.

Formally labeled “the Tanner room,” 310 was named after a man called Obert, about whom I know nothing. I don’t know exactly how many hours I’ve spent there. I also don’t know how many lattes I’ve brought to class, how many times I’ve nodded off in front of my professors, how many questions I’ve asked, how many questions I should have asked, or how much better I could have done if I had tried a little bit harder. I don’t know that I deserve to be with the company I have in that room. I’m in luck, though — it’s a good place to go if you want to recognize the weight of your stupidity while feeling relatively unintimidated by the burden of it.

In the spring semester, the best time to have a class in Em 310 is during the last dregs of a weekday afternoon. At first, when you head home in January, you’ll push the heavy doors open into a darkened Yard, streetlights illuminating the paths spotted with stragglers heading home for a late dinner. The weeks pass quickly after that. I walk out of the building so absorbed in trying to piece together the last hour’s conversations that I don’t notice when spring creeps in — then, after our third-to-last meeting I’ll finally realize that it’s light out again, the age-old rediscovery of early-evening daylight. Without a doubt, the worst time to be in Em 310 is right after lunch — about 1 or 2PM — on a day where the heat is cranking and you’ve only snatched five hours of sleep. You know what happens next.

I’ve been wondering lately if my younger self would be impressed with what I know now. (Achieving the status of mediocre wanna-be philosopher is still something to write home about, no?). I’ve read Descartes, I’ve written on Kant, and once in a while I’ll think of an idea that could be generously termed “interesting.” In reality, former-Lauren would probably identify too much with current-model Lauren to admire her. At the very least, she’ll recognize my attachment to a Harvard classroom as the same kind she’s felt towards the classrooms in which she spent months at a time through elementary school. You can’t help feel attached to a place that stays the same while you keep growing.

What have I learned, in the end? How much is there to really know about a room? Epistemologists sometimes talk about the difference between knowing that and knowing how, the theoretical knowledge we use to invent a bike and the practical knowledge we use to ride one. I know that the Tanner room is on the third floor of Emerson Hall, home to Harvard’s philosophy department. I know how to walk up three dusty flights after an overly-brisk walk from the quad — both to step behind the foot-sized hollows that can only form on stairs regularly run-up and tramped-down by students. And to sip some water from the fountain on the third floor before I continue into 310, hoping there’s still room for me at my favorite side of the table.

Lauren Covalucci ’14 (covalucci@college) stayed up to write this article and just barely avoided falling asleep in class the next morning… in Emerson 310.