To every liquid nitrogen ice cream there is a season. 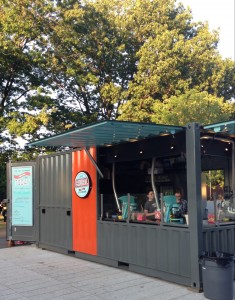 Early this semester, I noticed a new addition to the Science Center Plaza. No, it wasn’t the farmers’ market on Tuesday, nor, despite its resemblance to a food truck, was it Benny’s Crepes, Whole Foods, or Bon Me. After walking past it a few times, I decided to investigate. I approached the pewter-hued structure gingerly until I was finally close enough to decipher the words on the orange and blue logo: “Churn2: Superior Ice Cream.” A wave of excitement rushed over me. I had to try this ice cream. They definitely didn’t look open, but I noticed a crack in the front window, and saw movement. I poked my head under the crack and asked, “When do you guys open?” To my disappointment, the voices responded, “Probably within the next three days.”

Being the ice cream stalker that I am, I came back every day for the next three days, wondering if Churn2 had finally opened. Sure enough, three days later, there was a sign boasting the opening flavors: Strawberry Lime and Bananas Foster. Today was the day! That afternoon, I ordered a small Bananas Foster, and my taste buds were in heaven. Creamy and smooth, with noticeably fresh ingredients, Churn2’s ice cream is damn good.

And build a business, he did. Churn2 has been wildly popular since it opened. I can attest to that, because I’ve been there at least twice a week. “The response has been amazing,” said Chan. “I’m really lucky to have hit Harvard at a time when they are seeking new opportunities, especially with all the food trucks.”

Despite Churn2’s successes, there have definitely been some roadblocks to overcome. Unlike the other food trucks that frequent the Science Center plaza, Churn2 does not have commissary space where they could get deliveries at one central location. As a result, it has been difficult for Chan to set up accounts where people are willing to deliver straight to the Science Center plaza, and so he has had to rely on keeping the ingredient list really simple. Luckily, though, Harvard has been able to assist him in sourcing ingredients; sometimes, Chan will piggy-back orders off HUDS.

Harvard has also been a big help with staffing, which has been another obstacle for Chan. In fact, Churn2 only has two non-Harvard employees. The rest are Harvard students, provided to Chan through HSA. Roland Yang, CEO of HSA, has called the venture successful so far. Three students at a time work three-hour-long shifts in the container. One takes orders, and the other two churn the ice cream. Any Harvard student can work at Churn2, and the training, provided by Ash and his team, is completed after one three-hour shift. The one downside to having a staff full of Harvard students, however, is that they cannot work later in the day. “All the students can only work 3 hour time blocks and 20 hours a week,” Chan explained. “I have restaurants in California so I’m used to having people working much longer hours. But I’m amazed the students can even take time out to work on top of their academics.”

Even though Harvard is surrounded by ice cream stores — Ben and Jerry’s, Lizzy’s, J.P. Licks, Pinkberry, and Yogurtland, to name a few — Churn2’s ice cream stands out. Not only is it made-to-order, but the flavors change daily. According to Chan, all of the flavors are made on a whim. The popular “Apple Pie” flavor came from Chan simply buying apple pie and tossing it into the ice cream. “Maple Bacon,” Yang’s flavor of choice, was a result of throwing bacon bits into the mixer, and “what came out was beautiful.” Unfortunately, this delicious ice cream will not be around for long. Churn2 is a pop-up restaurant, which means that after a few weeks, it will be gone. Chan predicts that Churn2 will remain open until mid-October, or as long as the weather cooperates. Luckily, he has a few ideas of what he would serve if the weather turns earlier than that. He even plans to come back next year, if Harvard will let him. I’m sure I’m speaking for many other ice-cream lovers when I say that I hope he does. After all, Churn2 is the only place to get liquid nitrogen ice cream in Boston, and I’m definitely going to need my fix.