Harvard is no longer a place where the sun don’t shine. 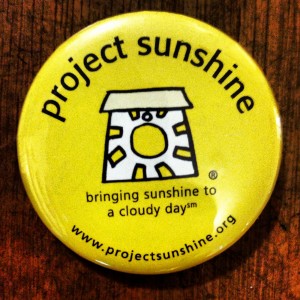 Instead of setting up a booth at the Activities Fair, complete with free candy and a homemade sign, Angela Oh ‘15 and Christina Vourakis ‘16 flitted through the throngs of freshmen, decked out in vibrant yellow shirts and armed with equally bright pins and pamphlets. They were on a mission — one that could not have been accomplished by simply setting up a booth. Only official Harvard organizations are permitted to have booths at the fair, and Project Sunshine, of which Christina and Angela are the co-presidents, is a new organization on campus that Harvard has not (yet) officially recognized. The only two members before the fair, the co-presidents knew they had to garner new members somehow.

Project Sunshine is not entirely new to Harvard. The non-profit organization, which provides social and educational programs to ailing children and their families, had a chapter on campus several years ago, but it too was not officially a Harvard organization. As a result, when the presidents left Harvard after graduation last year, so did Project Sunshine.

Oh remembers receiving an email from the Harvard Pre-medical Society, which was looking for people to run Project Sunshine after the previous presidents graduated. During her time at Harvard, she had not yet found a volunteering opportunity that truly interested her and fit into her schedule. “Although there are some great PBHA programs, I couldn’t find one that clicked with me,” she admitted. What drew her to Project Sunshine was its unique approach to volunteering. “The programs were so specific and different,” she said. “They aren’t just teaching, mentoring, or tutoring. There are lots of activities — like cooking and arts and crafts — to do with the kids.”

Project Sunshine’s headquarters have been instrumental in the revival of its Harvard chapter. They have a lot of experience giving guidance to college chapters especially, since there are so many. Each chapter is matched with a mentor who has led a Project Sunshine chapter in the past, who check in weekly over Skype to make sure everything is running smoothly. Vourakis even visited the national office in New York to take full advantage of the help they were offering. Oh described her and Vourakis’s relationship with nationals as “lots of phone calls, lots of mentoring, and lots of us asking questions and them providing us with more than enough answers and documents.”

Even with all the support from Project Sunshine’s national headquarters, taking on the responsibility of running a nascent organization and making it official is no easy task. Without a booth to promote Project Sunshine, spreading the word was especially difficult. But even just being able to pass out a few pamphlets and buttons led to 10-12 new members. Of these new members, several will soon become board members after a short application process. The board and the co-presidents will then meet to write up a constitution — fancy Harvard-speak for “a summary of what the organization is about” — and select a faculty advisor. Finally, Vourakis and Oh will fill out an application due in early October, and they will hear if it is accepted in November. “It’ll be a heavy workload during the first semester, but after that, it should all be smooth-sailing,” said Oh.

Luckily, the Harvard chapter of Project Sunshine need not wait to be official before they start their volunteer work, which can take on two forms. Off campus, trained volunteers, who must be over 18, will go to Tufts Medical Center, where they get to decorate cookies with adorable children for two to three hours roughly once a month. The training is not very rigorous. Simply watching a short PowerPoint presentation on how to behave in a hospital environment is sufficient. On campus, anyone, trained or untrained, minor or not, can volunteer for “Sending Sunshine” events, which are very relaxed and involve either making craft kits or decorating cards with uplifting messages in them, also known as sunny-grams.

As the organization grows, Oh and Vourakis are considering other activities to do with the kids at Tufts Medical Center in addition to cookie decorating, such as making maracas, crayon art, and lava lamps. In the introductory meeting, they emphasized that the volunteers can pick and choose which activities to do with the kids based on their own interests. The national headquarters of Project Sunshine provides its chapters with a wealth of resources, including a long list of acceptable activities from which to choose. “Everything [at the national headquarters] is stabilized and organized, which makes it so much easier for us,” explained Oh.
Vourakis and Oh also hope to collaborate with other groups on campus to help spread the sunshine. For fundraising, they might potentially work with the Harvard College Arts Society and have an event with a small entrance fee. Oh thinks “Sending Sunshine” events on campus would also making a good opportunity for group bonding for sororities, other volunteer organizations, or random small groups “so they can get to know each other better while doing something useful.”

The relaxed yet rewarding environment Project Sunshine offers is a rare find in a volunteering opportunity. Though its presence at Harvard is small for now, Oh and Vourakis, along with their newly recruited members, hope to not only make Project Sunshine an official Harvard organization, but also to spread the experience of working with children and to expose undergrads to a unique, hands-on way of volunteering in hospitals that doesn’t involve being a candy-striper or a paper-pusher.