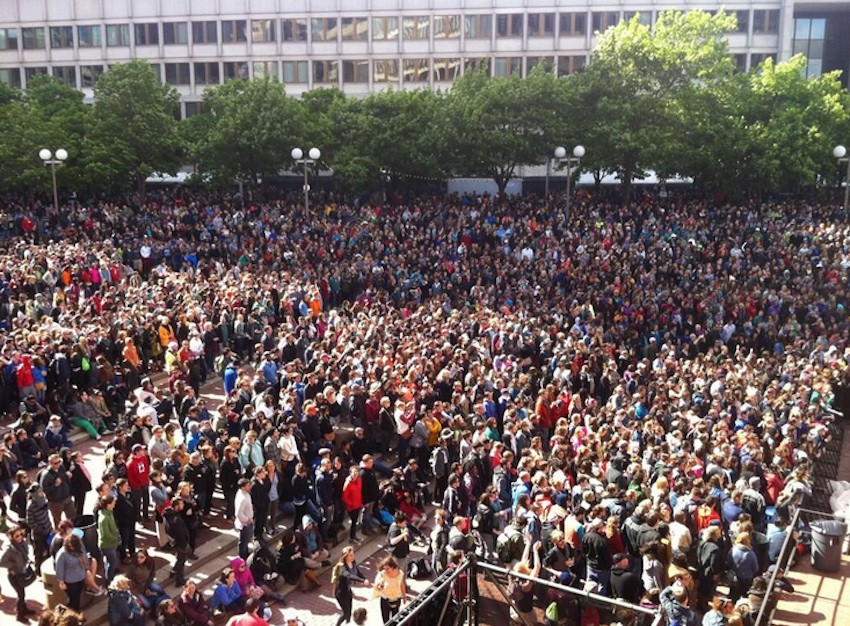 Q: Can you first tell me about the history of Boston Calling?
A: Sure, I was first working for WFNX and the Boston Phoenix. We had done a bunch of events in Boston… and we had done some free shows on City Hall Plaza, and we thought there was an opportunity to do a big ticketed event on City Hall Plaza, so we started working on it for WFNX, and ultimately WFNX decided not to do it and stopped broadcasting, so a partner of mine from WFNX and myself thought we could do it on our own. So we branched out and started the festival.

Q: When did you start seriously planning the festival?
A: We started planning it in early 2012 for WFNX and then ultimately made the switch and did it on our own around October 2012.

Q: Can you tell me about the role Aaron Dessner of The National played in getting the festival up and running?
A: Number one: The National headlined [Boston Calling] in May, which was wonderful for them to be a part of it. Number two: Aaron had some experience in curating interesting festivals around the world. He had done some in Europe, some in New York, and he really liked the concept of bringing this festival to Boston and wanted to be more involved than just having his band play there. We met with him a couple of times and started working with bands that he really liked and would like to see in the line-up. He did work on his end to offer his opinion and reach out to some bands directly and make sure they were on board to play the festival.

Q: On the topic of curating the festival, can you tell me about the process of picking such an eclectic line-up, with Vampire Weekend, Kendrick Lamar, and Major Lazer all headlining? Is there a committee set up? Does someone have the final say?
A: That’s a good question. There’s a committee, and there’s a lot of different people involved in making the line-up come together. I’m a part of it, Aaron’s a part of it, we partner with Bowery Presents, and they’re a big part. The way that it works is we all get on the phone, and we look at who is touring at the particular time of year that we are trying to book, and we reach out and make offers accordingly. It all comes through Bowery Presents, which has a great reputation in the industry for treating artists right and having a great relationship with agents. So that’s where it all comes from: a lot of long conference calls and putting offers in front of agents.

Q: On a different topic, it seems strange that as festivals have been getting more and more popular in the past couple years, Boston has never really had a big-name festival of its own until now with Boston Calling. Why do you think that is?
A: I think it’s tough. I think it’s challenging getting a festival off the ground, because there’s a lot of hurdles you have to go through in the city of Boston. And those are there for a good reason, everyone wants to make sure that safety is the number one priority when you’re doing a big event in downtown Boston. And when you look at the spaces that are available: the Plaza or the Hatch Shell or the Boston Commons. There’s a lot of pros and cons to each of them. Getting the right line-up in the right place at the right moment… you need a lot of things to come together to make that happen.

Q: Were there any particular challenges that you faced as a result of having it be in such an urban setting, as opposed to festivals like Sasquatch, which are in big outdoors areas and a lot more rural?
A: I think Sasquatch probably has a lot of challenges that we don’t have, but we have easy access for everyone to take public transportation to our festival, so that’s a big win for us and the audience. But we are in the mayor’s backyard, so for us, safety is critical for any major event… even more so when you’re on Government Center, on City Hall Plaza, it’s just critical that everything runs very smoothly, so we make sure that our relationships with the police, the fire department, the special services, and EMS is all well thought-out, and we have plenty of meetings with them.

Q: What do you see for the future of Boston Calling? Do you see it expanding into a bigger festival? And what artist would you love to come to Boston Calling in the future?
A: It’s funny, we were talking about this in the office earlier and we thought a great headlining line-up would be Megadeth and Tom Waits together [chuckles]… but there are lots of bands, and we haven’t even scratched the surface yet…. So right now we’re working on 2014 and seeing who’s available and who’s touring.… But as far as how the festival will be laid out in the future, we like this model of twice-a-year. I think we can do a little more with the week leading up to the festival, with local bars and restaurants and more local bands, but I don’t see us expanding to add a third festival or anything like that.

Q: Last quick question: what artist are you most excited to see?
A: From an audience perspective, I’m really excited to see what happens Sunday afternoon and night, when Kendrick Lamar, Major Lazer, and Passion Pit all play back-to-back-to-back.