Let’s Not Debate Facts and Logic. 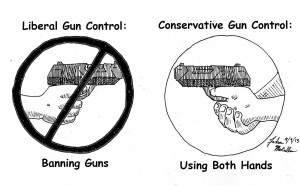 On September 2, a 16-month-old boy was fatally shot while riding in a stroller. The tragedy, occurring a mere twenty minutes from my family’s home, was a strident reminder of the anger I felt a few weeks ago upon hearing someone state, “Liberals are the biggest hypocrites, claiming they are pro-choice but not allowing citizens to choose to own guns or smoke.” Instead of addressing the inaccurate quote, I aim to provide an argument for stricter gun control based solely on statistics and logical inferences.

The debate on gun control, subsequently after the Sandy Hook Tragedy, left us with a quote meaning to subside all questioning on whether people’s “fundamental” rights should be “infringed.” “Guns don’t kill people; people kill people.” Is this really supposed to make a logical and coherent argument? Of course, a person’s intention to murder is the ultimate cause, but I think it’s safe to say guns pave the pathway that separates intent from occurrence. It is guns, not people, which are the proximate causes of firearm-related homicides.

A chart presented by Professor Nicholas Christakis clearly delineates data gathered on mechanisms of homicide among individuals aged 15 to 24 divided into three categories: firearm, cut/pierce, and other. The data help us understand a striking reality; the United States has an abnormally high rate of deaths per 100,000 not in all three categories but in one particular category: firearms. Therefore, it would be inaccurate to assume that guns don’t provide people with a means for suicide. In this case, one cannot simply say, “If someone had the intention to murder others but didn’t have access to a firearm he/she would find another weapon or means to do so.” This is false because the U.S. doesn’t have abnormally high “cut/pierce” and “other” rates of homicide; therefore, intent to kill does not equate with being able to do so (actual vs. proximal). Further, there is a direct correlation between ease with which guns can be accessed and firearm homicide rates in all the countries below except for Israel. The simple fact is that firearms make it easier to kill.

Let’s make a quick comparison between the U.S. and Canada. According to gunpolicy.org, the estimated rate of private gun ownership (both licit and illicit) in the United States is 101.05 firearms per 100 people compared to 23.8 firearms per 100 people in Canada. The annual rate of deaths due to guns, for the previous five years, in the U.S. was 10.25% compared to 0.54% in Canada. In the United States, the annual rate of unintentional shooting death per 100,000 people in 2001 was 0.28%, but in Canada it was 0.08%. Now, taking a moment to reexamine the seemingly logical quote used as an attempt to prevent stricter firearm regulations, it is lucid that the guns are in fact doing the killing. Since these were unintentional firearm deaths, a person’s intent to kill is by no means the reason for the death. In this sense, guns can and do pose a negative externality to society; a person’s use of a gun has an undeniable affect on those around him or her. Similarly to cigarettes and any other negative externalities, guns need to be regulated.

Protecting yourself from others and the government? I fully understand that people should be able to protect themselves from their government. However, stricter regulations and further mental health tests would not take those rights away. The second amendment states, “A well-regulated militia, being necessary to the security of a free state, the right of the people to keep and bear arms, shall not be infringed.” We are no longer living in the 18th century, a time with amplified hostility among the States and a serious threat of invasion. As important as it is for us to protect ourselves form our government, logic shows guns will not help. A Federal Government with the military at its disposal has the capacity and enough firepower to destroy not only our country but also a majority of the world. Even if every citizen were armed, guns will not protect anyone under this unlikely but genuinely feared circumstance.

Antoinette Tuff, a woman responsible for preventing a probable school shooting, did not rely on a gun to convince the shooter to give himself in. Although not a fact, if Tuff used a gun rather than her compassionate words, the chance for violence and fatality would have been a lot greater.

A multitude of studies on suicide have suggested that it is not the planned out and logical decision some may perceive it to be. It is an irrational decision that most people make in the flicker of a moment. Additionally, it was found that people who committed suicide were seventeen times more likely to live in households that possessed guns. The person may be doing the actual sitting, but having guns as handy helpers really ensures an irrational thought becomes a reality that people can not undo.

A possible proposal? I am by no means an expert on gun safety or regulation, but I don’t believe you need to be one to realize that stricter regulation of firearms is imperative to reducing the homicide rate in the United States. A person’s mental state is not thoroughly examined and simply swept under the rug even though it may be at the root of the problem. To prevent accidental deaths through firearms people need to be properly educated on handling handguns and other similar weapons.

Albert Murzakhanov ’16 (amurzakhanov@college) thinks we should paint by numbers again.