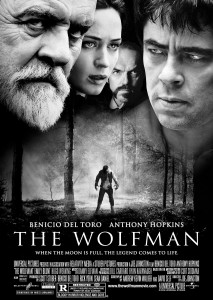 The Wolfman, directed by Joe Johnston, is not a bad movie, but it suffers from a serious lack of depth and perhaps dialogue.  Given the hot mess that is Team Jacob and his abs, it was only a matter of time before brooding werewolf films surfaced to exploit a similar place in the guy world.  I saw this movie with a girlfriend, and we were probably the only pair of girls in the theatre.

Cutting to the chase, the movie is a food fight of limbs, guts, and fancy ketchup.  Beneath the R-rated gore is a storyline — simple, predictable, but somehow no less terrifying due to an over-zealous music score and confounding CGI. Set in the moor country where night wins over day, the story opens to a full moon and the voice of a young woman named Gwen (Emily Blunt).  She writes to a Mr. Lawrence Talbot (Benicio Del Toro), brother of her vanished fiancé, and implores him to return home after these many years to help search for the missing man.

Something of a theatre star, Lawrence is conveniently introduced onstage holding Yorick’s skull — a rather heavy-handed metaphor for the tragic hero. He is touring England as Hamlet and is about to depart for the Americas when he receives Gwen’s letter.  What are fame and fortune to family?

And so, like the prodigal son, Lawrence returns home.  Home is a derelict castle set on acres of untended weeds.  Vein-like stains tarnish the bricks, and thick grime coats the windows.  Inside is no different.  Mounted lions guard the twisted stairway; furniture suffocates under dust, and rodent mischief abounds.  Upon arrival, Lawrence learns from his father, Sir John Talbot (Anthony Hopkins), that it is too late: his brother has been found as a tangle of appendages with cause of death unknown.

The troubled Lawrence mulls over possibilities in a tavern where weathered men spin gypsy yarn that something big and ugly roams these parks. Like any tragic hero seeking a quick end, Lawrence goes to the gypsy camp, provokes the beast ravaging the camp, and promptly gets bitten.  The rest of the story unravels both forwards and backwards.  In the forward sense, Lawrence transforms into wolf man with uncanny CGI realism; in the backward sense, he does his best to deal with a troubled childhood at the hands of his sinister father.

Now, Sir John Talbot is an unreadable man and quite possibly the most interesting character of the lot. He speaks in roundabout riddles with an unsettling calm and a permanent smirk; he taunts, pokes, and prods as if life and death were just another game. The remaining characters, however, are thoroughly transparent. Lawrence plays the melancholy gentlemen: noble, disgruntled and tragically embroiled in the rapid decay of his family.  Gwen acts the morally righteous love interest, a prim and proper silhouette in well-cut clothing.  And Singh (Art Malik), the all-knowing manservant, has scenes so profound, one could almost figure out the film from his pauses.  Scattered amongst the prominent characters are stereotypical religious nuts, quack doctors, and officers who are always a minute too late.

But it is not the plot or really the characters that lures you into the film — it is the brilliant production set. Think thrashing grasslands, dank forests, and bottomless waterfalls. Think bleeding gravestones, walls that talk, and cheap mirror tricks.  Think Fall of the House of Usher — but gloomier.  The depravity of this place knows no bounds, for it is truly a land of full moons.

My major quibble with the film is that it remains undercooked; such raw emotions deserve some polish now and then.  The love story between Lawrence and Gwen could do with fewer grunts and starts and more actual words.  I’m not asking for Jane Austen here, but I would just like to know why Gwen, who dresses like a nun, falls for a man with a major hygiene problem.  Is it pity? A fetish? Also, what kind of consciousness pulses behind that furry mane?  At times, he shows little restraint and just claws through bodies like butter; other times, he shows some restraint but then claws through anyway.  What drives the wolfman besides an insatiable thirst for destruction?  I fear the answer is not much, which leads me to conclude that the movie is a bit too much wolf and not enough man.

All in all, The Wolfman is a visual treat and a legitimate date movie.  I have two theories as to why this came out on Valentine’s Day and not Halloween.  First, it will make couples cuddle through their fear. The audience does not coo with you; the wolfman is not fluffy and cute.  In the first five minutes, the girl in front of me ricocheted backwards and was poised to flip over had her boyfriend not checked her; they remained knotted for the remainder of the film.  Second, it will make you appreciate your mate, for he will appear far less hairy in comparison.