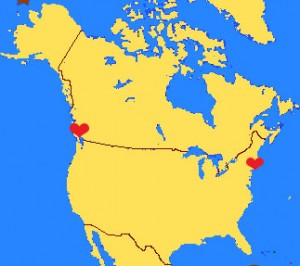 The decision to undertake a long-distance relationship can be a hard one to make. There’s a reason why a lot of people are skeptical of even trying — it requires a great deal of patience, sacrifice, and love. It has to be something that both of you truly want to do, not something that one does because the other wants to, or something that you feel like you both should do just because you’ve been together for a long time. It is definitely too much emotional stress for it not to be completely mutual. That said, while distance can make relationships tough, it can be more than worth it if you are both willing to take that step.

Before you leave each other’s presence, you should both agree to the same set of rules — what would be okay, or not okay? What are the limits and expectations?

Once you’re apart, though, here are some tips on handling the distance:

As with all relationships, the most important part of a long-distance relationship is communication. With distance, it becomes even more important. Without the ability to display physical affection, verbal communication becomes the only way you can show your significant other how you feel. It doesn’t have to be over the phone or on Skype, but it is the little things that can make all the difference. A cute text when they’re not expecting it, a thoughtful email sent late at night so they’ll see it first thing in the morning, a care package of comfort food from your area (expedited, of course), or a hand-written note sent by snail mail are all sure-fire ways to make their day.

As Kevin Mechenbier ‘12 said, “exhaust all forms of communication. It isn’t always about talking often or for hours at a time, but by calling, texting, skyping, emailing, and writing letters, I think it gives the idea to my girlfriend that nothing can keep me from talking to her.”

Which brings us to our next two points: sharing everything, and making sacrifices.

2. Share everything — even details about the daily grind — and be honest.

When people are together, they often don’t have to talk about the daily monotony, because they already experience it together. Ugh, my TF is bipolar like none other. Man, they had really good Korean barbecue tonight! Being apart means that these monotonous things can’t be taken for granted. It keeps you updated on each other’s lives, not just in terms of big events, but also in terms of the small things that can change our emotions one minute to the next. It can be hard when you’re far away to read the other person, especially when they’re having an “off” day – it’s always good to tell the other person the little things that annoy you, so they know that it’s not because of them. That way, when you finally burst from dealing with stress, you won’t spend more angry energy trying to explain how everything led up to that point.

3. Be willing to make sacrifices — but be smart about them.

You only have 24 hours in a day, and some things are more important than others. Sacrificing certain things allows you to demonstrate how much you care about the other person, how much they mean to you, and how you view them as an integral part of your life. If the other person needs or wants to talk, make time for them.

That said, not every sacrifice is a smart one. Don’t do anything that would put your future goals, dreams, and career on the line. This caveat leads us to the fourth point: being independent.

Just as two people in the same place shouldn’t plan and do absolutely everything together, two people in a long-distance relationship shouldn’t make every single decision based on the other person, either. You should hang out with your friends, go to events, apply to internships you really want, etc.; both of you should. You don’t want to live with resentment — you never want to get yourself into the mentality that you’re missing out on fun or your life goals because you’re limited by, or obligated to, the other person. The best outcome is for the two of you to end up in the same city after graduation, but pursuing your dreams now will open up more ways for you to be in a city of your choice in the future.

Having a social life outside of the relationship is a good way to recharge and stay happy. Being involved in extra-curriculars can also help you stay busy, making your time apart go by faster. Be careful about schedule discrepancies, where one person is a lot busier than the other. It’s tough to have a lot of downtime to miss someone who doesn’t have the same amount of free time to talk. That’s why it’s important to be patient.

5. Be patient. Don’t fall into the fundamental attribution error.

In psychology, you learn about what’s called the fundamental attribution error: we see someone’s behavior as an example of what kind of person s/he is, rather than attributing it to circumstances and the present situation (while for ourselves, we always make excuses about the situation, rather than make any claims about our personality). It can be difficult, while being far away, to give someone the benefit of the doubt. Is he not calling because his class ran late, because he left his phone in his car, or because he doesn’t care? Hopefully the two of you communicate well enough for you not to have to doubt each other’s feelings, but when little slip-ups happen, it’s important to be patient. Don’t be quick to point fingers and put the blame on them — there may be a lot of factors out of their control.

6. Look back fondly, be happy in the present, and always look forward to the future.

Presumably, you start a long-distance relationship with someone you dated in person for a while, so you’ll have a lot of wonderful memories and cute pictures. Every once in a while, you’ll reminisce (alone, or together), and it’ll feel nice, with a tinge of nostalgia. Don’t dwell on the past too much, though, even if it was spectacular, because it will probably make you miss each other even more. Be happy now; even though you’re apart, you still have each other. And always be excited about what the future holds, because you’ll finally be together, and all this long-distance business will have been worth it.

Susan Zhu ’11 (szhu@fas) knows her long-distance relationship is totally worth it. Consider this a  loving Valentine’s shout-out, Jeff Lane ’09!