One of the more unfortunate outcomes of Sex and the City‘s success (other than the obsession with rabbit vibrators–seriously, ladies, there are other kinds. Variety IS the spice of life) is TV’s scramble to find its replacement. For example, the upcoming Literary Superstars, a SATC-style take on the publishing industry. Matthew Reilly, an Australian thriller writer, wrote the pilot, which will star Jenna Elfman, the aggressively quirky star of Dharma & Greg.

Reilly, 33, described the series as a Sex And The City-style view of the literary industry. Its opening scene involves Elfman, who plays a book publicist, at a launch in her underwear. “[Publishing] is a funny world,” Reilly said.

I suppose TV is fairly saturated with police procedurals, forcing a thriller writer to strike out in a different direction. But another ditsy urban female who gets into embarrassing scraps and makes faces? Is that really necessary? Of course, before we get Literary Superstars, we’ll have to run the gauntlet of Lipstick Jungle and Cashmere Mafia—one from the writer of SATC, the other from the producer. Awkward!

Can we please just bring back Roseanne? She was funny, she was awesome, she was married to John Goodman, and she didn’t tacitly encourage the purchase of $500 dollar shoes. 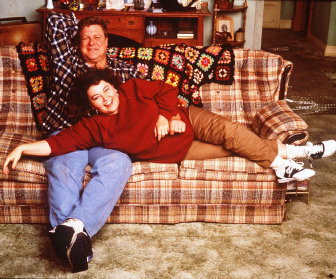