“Every fight doesn’t have to be Ward-Gatti.”
-HBO boxing head Kery Davis trying to sell the Hopkins-Wright PPV card

This pitiful justification for squandering fifty perfectly good dollars on a complete snoozefest had me in stitches when I first read it. The best you can do to market your fight is say that it won’t compare to a legendary trilogy??? That should be the fight’s new tagline, and they should make sure to add lots of pictures of people falling asleep to the ad for the fight. I can see it
now: 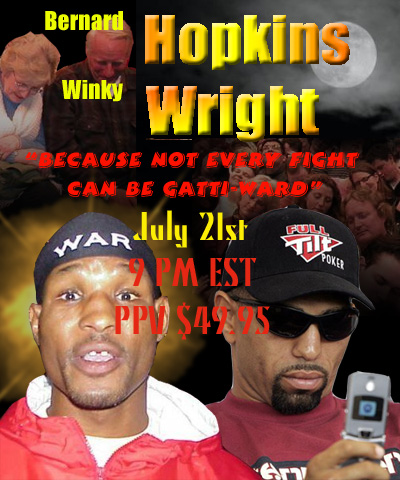 Yes, sir! I bet this one’s going to sell like hotcakes! Even the casual boxing fans are going to start drooling when they see that advertisement! Check out the lust for fame in Hopkins’ expression, the determination in Winky’s eyes as he stares at his phone, the rapt attention of that elderly couple in the background, the gratuitous graphic of an explosion! I’m so paying $50 for this one.

And if I were Arturo Gatti or Micky Ward, I would be suing for some of the royalties on this one. Either that or for libel, on account of being even remotely associated with this debacle.

I recommend taking this weekend to curl up on the couch and catch up on some good Sabado Gigante, because the boxing world is taking a long (probably 12-round) breather.

::edit::For anyone who cares, Winky lost to B-Hop by a predictable unanimous decision in what unidentified sources at the Indy described as a “tedious”, “tiring”, and “boring” fight. Those who paid for the waltz exhibition lost by TKO to HBO for giving up $50 for the two least interesting fighters in the game (and, yes, I include all the heavyweights in that statement). Save up your money for Mayweather-Hatton, people.::edit::