My experiences surrounding mysteriously-coiffed Peruvian celebrity novelist Jaime Bayly as of now have been lackluster. 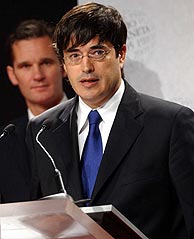 My first encounter with this strange uniformed character occurred when I was about seven years old. “Jaime Bayly: A new Late-Night show for the quick-minded, the educated, the intellectuals”- or so claimed the Telemundo spokesperson. Jaime’s was the new show replacing “A Oscuras Pero Encendidos” (“In the Dark, but Turned On”), which had been cancelled. At the age of seven, I was neither quick-minded, educated, nor intellectual, and certainly not yet into boys enough to appreciate a weird-looking dude in a suit. Not to mention that “A Oscuras”, with its obnoxious white dog- Azuquita (“Little Sugar”)- that told anti-Castro jokes, fat guy named Lancelot with Eiffel Tower hats, and scantily-clad Cuban ladies hitting on torturously unfunny host Paul Bouche, pictured with Lancelot, (no, I didn’t know what “Bouche” rhymes with back then), was my favorite show. No ferret-headed Peruvian could come close to the glory that was “A Oscuras”.

I was right. “Bayly” was cancelled within months, replaced by yet another Latin American variety show with scantily clad models and fat sidekicks.

Another twelve years passed, and that stuffy bore that replaced my favorite show as a youth became a distant, apparently non-existent, memory. It’s amazing the grudges that all these new cable channels can give and take away. I get a call from my parents in my dorm room one autumn night, as they made a discovery on the South America Channel:

“This guy is great! There’s this guy on TV here that’s really funny!”
“Really? Who is he?”
“I don’t know- his name is Bayly, he’s anti-communist.”

By Thanksgiving break, I was extremely curious to meet this Bayly character. At the age of 19, I certain was quick-minded, Harvard-educated, and intellectual- and I appreciated a funny-looking dude in a suit, even if it is the same exact one every night. It only took one look at his now-aging ferret hair to bring back the memory. “Jaime Bayly? Is his name Jaime?” I asked my parents with some amazement at my recollection of names, much better than my recollection of faces (but up there with my recollection of hair styles, apparently). “Yeah, how did you know?”

“It’s the telemundo guy! He was on when ‘A Oscuras Pero Encendidos’ was on!”

From then on, I, like the good little academic I am, decided to do some research.

After grabbing some of his books at Widener, watching all his YouTube clips, and going to the office hours of everyone’s favorite if-he’s-not-tenured-all-Harvard-College-will-riot professor of Latin American politics for some info on the guy, I decided it was time to write, but, for that, I needed one more piece of the puzzle that was to be my most researched article for the Indy, ever (ok, so that’s not saying much, but still).

Well, Jaime, you tell me I can send you interview questions, charmingly complimenting my writing skills in Spanish. The fact that you answered my email request merely seconds after I sent it was very exciting for a young writer that was accustomed to writing commentary with the same political tinge as the one you read off your teleprompter. You do this, of course, only to then ignore my constant emails demanding a response (sent several weeks later). You only answer the email titled “Happy Birthday” with “thanks, love- all the best to you and yours”, making me miss my first deadline ever (and leaving my editor-in-chief, who has no clue who you are, thoroughly confused).

Clearly, as you are the cause of the only stain on my journalistic record (not to mention the demise of one of the best programs ever to be broadcast on Telemundo), I should have an impardonable grudge against you. And, in some ways, I do. I’ve never finished one of your novels (they tend to get insipid around Chapter 5). I watched the movie version of “No Se Lo Digas a Nadie” (“Don’t Tell Anyone”) and was underwhelmed. In a recent article from Peru’s Correo, you state you prefer enemies to friends, because at least they write about you in their publications and don’t come to visit. Well, apparently, it’s true, even if it is in a language you appear to barely understand (Bayly requested a Spanish version of the questions he never answered).

Yet I’ve given up compatriot and fellow Harvardian Conan O’Brien to watch your tripe syndicated on South American television. I guess it is true that nice guys finish last (and, conversely, that pretentious bi guys finish first, no matter what your mom says). Or maybe it’s just the hair.

Note: Sorry for all the Spanish Links, my monolingual friends. There’s not much of a way around it in this post, though.