400 already? How time flies. Anyway, Virginia apparently celebrates its colonial heritage by inviting the Queen of England back for a visit every 50 years.

The Associated Press had a boring old lede:

But not USA Today!

RICHMOND — The British just can’t get away from their dreary weather.

Queen Elizabeth II arrived here Thursday, the first day of a six-day visit to the USA, bringing a drizzle of rain but carrying on with the usual ceremonies, including a speech, a walkabout, a meeting with Virginia Tech massacre survivors and a greeting by a group of Virginia Native Americans dressed in buckskins.

Sounds like a jolly good time. Perhaps USA Today could also have worked in an analogy between the Queen’s multifaceted speech and the various colors, levels, and frills of her quite intriging hat. 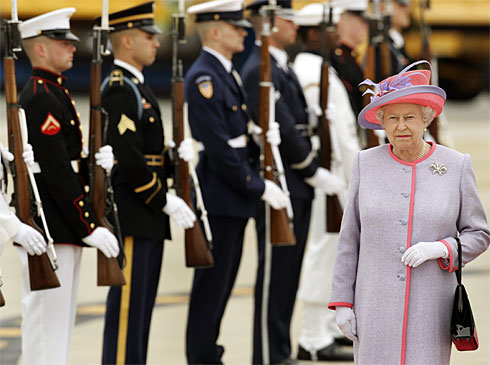