My name is Silverio “Sal” Vega. I am the mayor of West New York, New Jersey, and am currently vying for a state senate seat against Union City, NJ mayor Brian P. Stack. The historical path the United States, and especially this wonderful 33rd District of New Jersey I call home, has followed to reach the present is littered with brilliant political campaigns. From Lyndon Johnson’s “Daisy” ad to James Carville’s “It’s the Economy, Stupid!” to the Swift Boat Veterans for Truth ads, breathtakingly effective campaign propaganda grows abundantly in the American political field.

As a candidate for a political position myself, and one endorsed by the official local chapter of my party (the Hudson County Democratic Organization), I feel compelled to begin a personal crusade against effective campaigning. America does not need any more Dick Morrises or Karl Roves in its history books, and Michael Dukakis is looking pretty lonely as the flagship example of unintentional political satire in the modern era. While I have not yet mustered up the will to wear a helmet and drive a tank around West New York, I acknowledge that my completely avoidable political demise is necessary for the entertainment and education of political junkies across the nation. I have many factors against me, such as my overall likeability, the official endorsement of the Democratic Party, and the fact that I, as the son of Cuban refugees and an immigrant myself, can relate to the large immigrant population of my district. However, I understand that America needs someone to teach the new generations of politicians cooped up in their New England Ivy League schools how to lose every last percentage of the possible vote in an election where one might have stood a chance.

This mission is the driving force behind my actions in the past few days. As a Democrat, I know I should value the input of ethnic minorities as much as possible and keep them by my side. I know I should avoid using worn-out terminology about defending liberty associated with Republicans. I know I should also simultaneously be working to cleanse the Democratic image of being wishy-washy on defense and flip-flopping on all issues by adamantly declaring support for the troops and keeping my word at all times. This is precisely why I went out of the way to offend my own Cuban community, the second largest in the nation, this past week by refusing them a permit for the eighth annual Cuban Day Parade down Bergenline Avenue through West New York. To add a dash of controversy to this in case people feel forgiving towards me, I decided to profusely deny ever being at the parades of the past few years, obviously knowledgeable of the video evidence to the contrary. This is why I have targeted the Dominican population, the second-largest group of the county, as well, using name-calling tactics against Union City employees who happen to be Dominican. This is also why I rode my “Freedom Wagon” down to the Memorial Day service this weekend and eclipsed the veteran services with political propaganda, much to the chagrin of all Hudson County war veterans. As you can see, I have all my bases covered when it comes to political failure.

Wouldn’t you like to know the secrets to creating a fiasco of galactic proportions like I have? Well, ladies and gentlemen, you’re lucky that I’m willing to share my wisdom.

Once I lose the state senate seat to Brian Stack, I plan on holding on to the spotlight for dear life by educating young politicians in the ways of unforced failure. For this, I am planning on releasing the following publication: 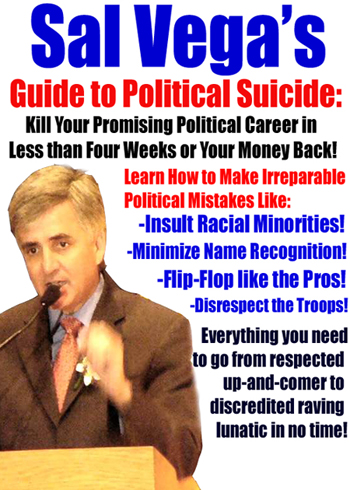 In this all-inclusive guide, you’ll find priceless tips on how to lose elections, from lying about obviously factual events on screen to offending all sorts of racial minorities to angering the military. I will teach you how to disintegrate your image from clean-cut underling to corrupt, egotistical lunatic within days. You will never be taken seriously in any political circle again after you read my book.

Please buy my book! I will need the money when I am banished from Hudson County forever.